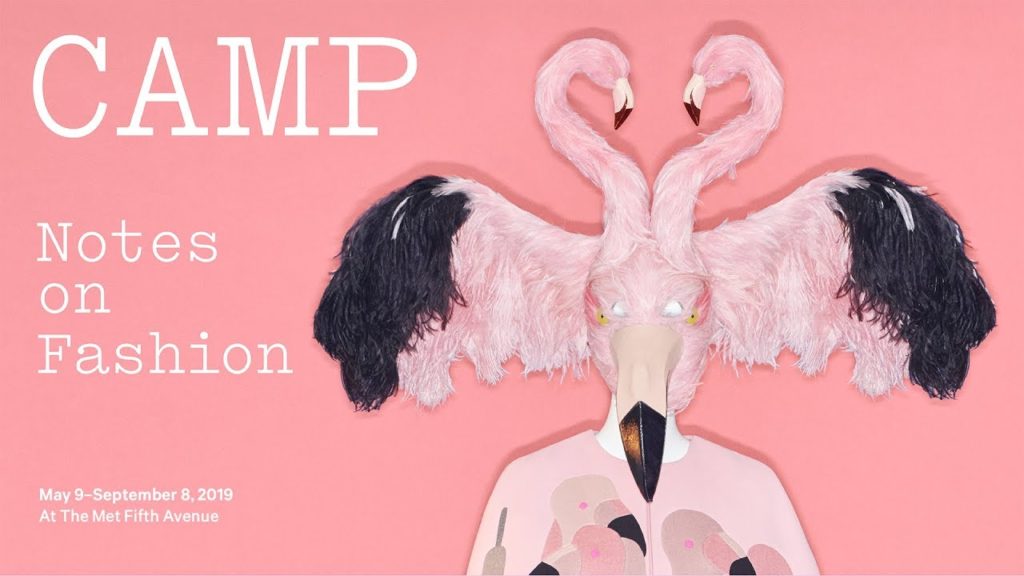 Through more than 250 objects dating from the seventeenth century to the present, The Costume Institute’s spring 2019 exhibition explores the origins of camp’s exuberant aesthetic. Susan Sontag’s 1964 essay “Notes on ‘Camp'” provides the framework for the exhibition, which examines how the elements of irony, humor, parody, pastiche, artifice, theatricality, and exaggeration are expressed in fashion.

Accompanied by a catalogue.

The Met celebrates “resurgence of camp” in new exhibition Camp: Notes on Fashion

The Met‘s Costume Institute has unveiled a pink-hued exhibition exploring camp fashion across the centuries, from the playful to the outrageous.

Camp: Notes on Fashion opens this week, following the Met Gala on Monday. Camp was chosen as the theme, thanks to the rising trend for deliberately exaggerated and theatrical fashion.

“We are experiencing a resurgence of camp,” said Andrew Bolton, chief curator for the Costume Institute, at a launch event earlier this week.

Although usually associated with LGBT culture, the word camp describes anything that is intentionally ostentatious or excessively effeminate.

“This exhibition might raise more questions than it answers: ‘Is camp gay’ ‘Is camp political?’ And, ultimately, ‘What is camp?’,” reads a statement from The Met.

“There are periods, however, including the 1960s, the 1980s, and the era in which we live now, when camp comes to the fore as the defining aesthetic of the times,” it said.

“It is no coincidence that camp resurfaces during moments of social, political, and economic instability – when society is polarised – because, despite its mainstreaming, it has never lost its power to subvert and to challenge the status quo.”

The show features meandering exhibition spaces, all coloured in a vivid shade of pink.

Glass vitrines display objects from The Met’s collection with a camp sensibility, including sculptures, paintings and drawings dating from the 17th century to the present. There are also 140 fashion ensembles on show.

Guiding the entire exhibition is Susan Sontag’s seminal 1964 essay, Notes on Camp, which describes camp as an aesthetic. The work was so influential that it catapulted the word camp into mainstream culture.

The essay features at the start of the exhibition, in a study of the etymology and origins of camp. Another installation displays Sontag’s 58 principles of camp, which include irony, humour, parody, pastiche, artifice, theatricality and exaggeration.

Sontag’s words also crop up again in an echo chamber that concludes the show.

This dark, double-height room is filled with colourful glass fronted boxes containing examples of camp fashion, with titles like Gender without Genitals, and Dandyism in the Age of Mass Culture.

Layered audio snippets create the echo-chamber effect. Many of these are Sontag’s original quotes, spoken by prolific fashion designers, and overlaid with interjections of Judy Garland singing Over the Rainbow.

“Camp’s disruptive nature and subversion of modern aesthetic values has often been trivialised, but this exhibition reveals that it has had a profound influence on both high art and popular culture,” said Max Hollein, director of The Met.

“By tracing its evolution and highlighting its defining elements, the show embodies the ironic sensibilities of this audacious style, challenges conventional understandings of beauty and taste, and establishes the critical role that this important genre has played in the history of art and fashion.”

One of the first rooms in the show includes an Italian bronze statue of a boy, which was part of a collection belonging to King Louis XIV of France. It features in a room themed Beau Ideal, in reference to an early 19th-century concept of male beauty.

The exhibit continues with more art relating to Versailles, the royal courts of Louis XIV and Louis XV, and objects exploring the figure of the dandy.

The exhibit then traces camp’s origins to the queer subcultures of Europe and America in the late 19th and early 20th centuries.

“The historical journey is thoroughly engaging. . . . you don’t stop thinking about it. It sticks with you and niggles in the brain.” —New York Times

“Just might top 2018’s extravaganza. . . . focused and cleverly thought out, offering an instructive journey. . . . entertaining and educative . . . the attentive visitor will relish in the many sensibilities of camp” —Independent

The New Black Vanguard: Photography Between Art and Fashion