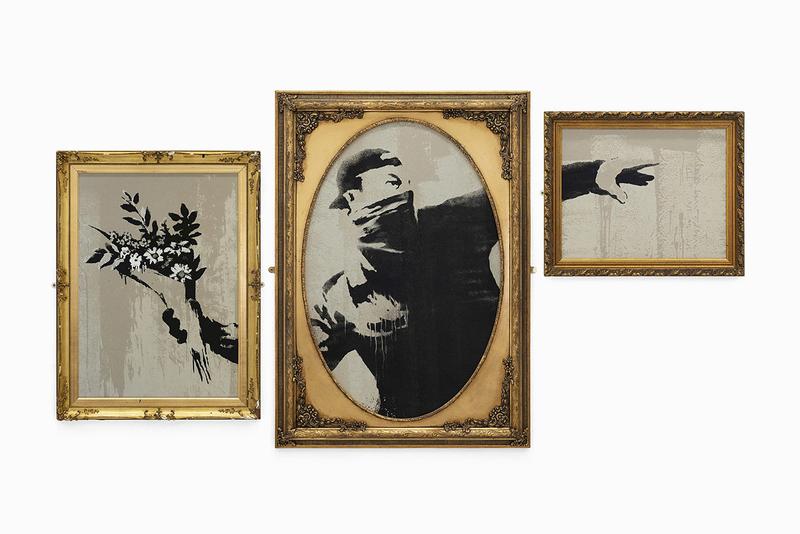 “It sells art, homewares, and disappointment.”

Following the Croydon store opening in London, Banksynow launches the online shop for Gross Domestic Product™. The elusive British artist purveys his first-ever line of homewares such as mugs, and rugs alongside significant one-off pieces such as the ‘bullet-proof vest’ worn by Stormzy at Glastonbury festival. Gross Domestic Product™ (physical and online store) was created by the artist to secure his “Banksy” trademark following a legal battle last year with a greeting card company that attempted to seize legal custody of his moniker to sell branded merchandise.

The new site encompasses a diverse selection of “art, homewares and disappointment” with the artist claiming to have “price fixed the first releases for lower-income patrons,” said Banksy to HYPEBEAST. Adding that “wealthy art collectors are requested to refrain from shopping at the current time.” The prices range from affordable to extraordinary with some of the products on the site available for as little as £10 GBP (approximately $12 USD) and signed original prints begin at £500 GBP (approximately $643 USD).

Banksy Opens Online Shop of Affordable Wares, But There Is a Big Catch

Just weeks after a Banksy painting sold for $12.2 million at Sotheby’s in London, the artist is offering some lucky fans with slimmer wallets a chance to acquire some of his work at a newly launched online shop.

On Instagram, Banksy announced that the store is hawking “art, homewares and disappointment.” Its name is Gross Domestic Product, and its tag line is “Solutions For Wealth.” Get it?

A showroom of these tongue-in-cheek products cropped up in London earlier this month, drawing crowds by the thousands, but was dismantled earlier this week by the artist.

Fear not, though: even as brick-and-mortar stores shutter, online shopping is thriving. There is a catch for would-be buyers, though. In order to purchase pieces, you have to jump through a few hoops. Shoppers can only purchase one piece each, and to get through the cyber-security portal, they must answer, in 50 words or less: “Why does art matter?”

Responses must be logged by October 28, and winners—which is to say, people who will be allowed to buy works—will be selected at random. According to the site’s fine print, the answers may also be used “in the event of demand outstripping supply.” (It should be noted that some pieces are only available in very, very limited editions.)

The site implores potential buyers to make their responses “as amusing, informative, or enlightening as possible.” One wonders what answer the buyer of the $12.2 million Banksy, Devolved Parliament (2009), would provide.

Graffiti artist Banksy has launched his own merchandise line, with items on sale for as little as £10, to protect his brand against a greeting-card company that is trying to “seize legal custody” of his name.

Banksy unveiled a pop-up-shop installation, named Gross Domestic Product, in Croydon, UK, to announce the launch of the merchandise range.

According to claims from the artist, he has been forced to release the branded merchandise following legal action from an unnamed greeting-card company.

“GDP is the homewares brand from Banksy and this is our first and only store,” said Banksy on Instagram. “The showroom is for display purposes only and the doors will not open. All sales will be conducted online when the website opens soon.”

“This shop has come about as a result of legal action,” the statement continued. “A greetings cards company are trying to seize legal custody of the name Banksy from the artist, who has been advised the best way to prevent this is to sell his own range of branded merchandise.”

Legal proceedings against Banksy began a year ago

According to news channel ITV, Banksy made the decision after taking advice from lawyer Mark Stephens, following the greeting-card company starting legal proceedings around a year ago.

“Banksy is in a difficult position because he doesn’t produce his own range of shoddy merchandise and the law is quite clear – if the trademark holder is not using the mark, then it can be transferred to someone who will,” Stephens is reported as saying.

According a to statement made by Banksy, many of the items for sale have been made especially for the online store.

“Sometimes you go to work and it’s hard to know what to paint, but for the past few months I’ve been making stuff for the sole purpose of fulfilling trademark categories under EU law,” he said.

This merchandise will be sold online, with items own sale for as little as £10 said the artist.

A website has been created at – grossdomesticproduct.com – where the products will potentially be sold. Currently the site displays a static image saying: “Gross Domestic Product. The homewares store from Banksy. Opening Soon.”

“So here it is – we hope to offer something for everyone, prices start from £10 but availability will be limited – all of the products are handmade in the UK using existing or recycled materials wherever possible. Including the ideas,” continued the statement.